The fast pace of software engineering is on us. Books like Continous Delivery tell us that releasing each week, each day, even each hour is becoming reality and having your business wait for a month, a quarter or a year is simply not acceptable anymore.

Kent Beck, author of several books on better software development like Extreme programming
also shows some common software practices that change when the release cycle of the software gets accelerated.

Here’s an extract of the video http://www.youtube.com/watch?v=KIkUWG5ACFY.

The first described changes are from Annual to Quarterly: 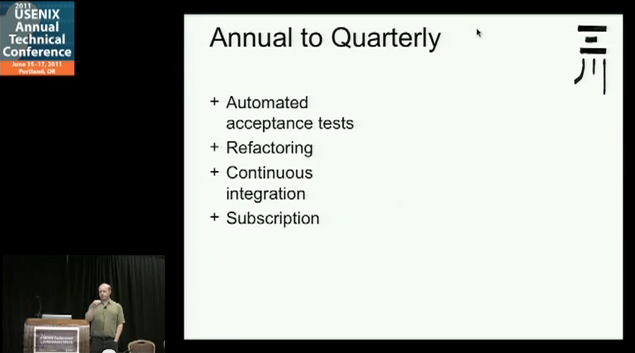 Would there really still exist software that is used by customers that is only released yearly? The only software that is released so uncommon are probably desktop operating systems and than only the initial versions of those. We all know we regurlarly get updates pushed of OS’es, not only on desktops, but also new OS’s on our tablets and mobile devices.

Still, a lot of practices need to be in place to get from annual to quarterly releases.